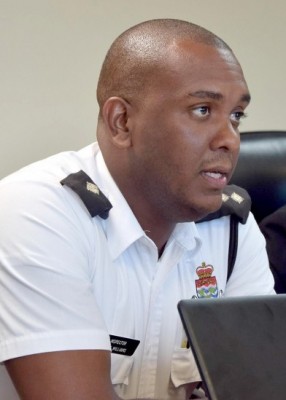 RCIPS Acting Police Inspector Roje Williams will be departing the Cayman Islands on Friday, 4 October to attend a 12 week intensive leadership development training program At the FBI National Academy located in Quantico, Virginia in the United States of America.

A/Insp Williams was nominated to attend this program by the RCIPS Commissioner of Police in consultation with the Director of the FBI. The FBI leadership development program is geared at global improvement for Law Enforcement Agencies targeting current and future police leaders.

Commissioner Byrne stated, “As a graduate of the FBI Academy I understand the strategic importance of attending such a prestigious leadership development program.  I am very pleased that the Director of the FBI has agreed to provide this leadership development program to the RCIPS.  A/Insp Williams has shown tremendous leadership potential over the period that I have been Commissioner and worked alongside him. It will be an intensive 12 weeks training for Roje with a blended mix of academic studies, leadership development and physical fitness.  The FBINA is considered a hugely prestigious leadership development program for aspiring police leaders and represents a significant opportunity for Roje, which I believe he will embrace wholeheartedly.  Roje had a lot of preparatory work to do before being accepted by the academy.  During his training he will be exposed to some of top tier leadership studies and will be required to present case studies as part of the program.  On a lighter note, Roje will have the opportunity to complete the Yellow Brick Road fitness and endurance challenge course, made famous in the film Silence of the Lambs.  Having completed the challenge he will receive an inscribed Yellow Brick which recipients proudly display in their office on return.  I wish Roje well on the course and look forward to receiving his performance report from the academy in due course”

After being nominated for the role, A/Insp Williams had to go through an application process, a thorough background check and also had to pass a physical examination before being accepted to the academy. He believes that he is the only representative from the Caribbean who will be in attendance and that there will only be a handful of persons from jurisdictions outside the USA.

A/Insp Williams says, “I am delighted at being accepted into the National Academy for the FBI. Not very many people are given such a significant opportunity to better their career. I am a career police officer and policing is what I love to do.  I accept all prospects to develop in my chosen field with open arms and I am excited to see what the training has to offer. Even more, I know that the networking I will be able to do with officers from other agencies will be priceless.”

A/Insp Williams will be doing training courses in Counter-Terrorism, Policing, Media Relations and Strategic Leadership. His studies over the 12 week period will take him to other states across the USA for field development and experience.

Over the past year, A/Insp Williams has been in charge of special projects and has led the policing aspects of several high profile events such as Kaaboo, the Royal Visit and the International Trading Summit. When asked how the training will benefit him in the post he now holds, he stated, “I am interested in providing the best service to the people of the Cayman Islands. In order to so as an individual and as a service, we have to ensure that we maintain a world class standard for the officers and the service as a whole, which is in keeping with the goal of becoming a world class civil service.”