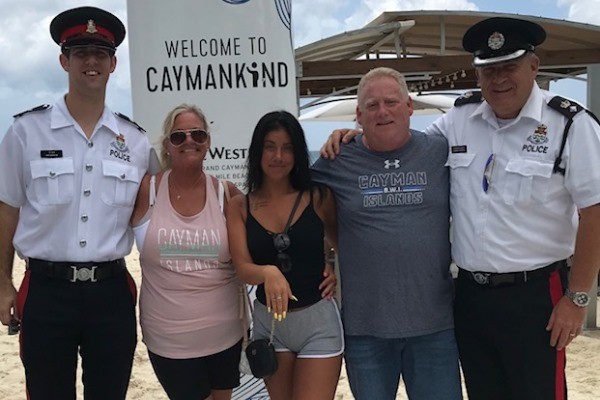 Since the relaunch of the RCIPS Community Policing Department in February, community police officers have been out in their communities getting to know their beats and the people within them. In two incidents over the last two weeks, officers were able to put this local knowledge to use in order to assist members of the public.

On the afternoon of Saturday, 23 July, Superintendent Robert Graham was approached while off duty at the Westin Hotel by a member of the public who had lost a ring while in the water nearby and was hoping for assistance in locating it. The ring had been given to the woman, who had just arrived on island, by her late grandmother and held significant sentimental value for her and her family.

Supt. Graham initially attempted to locate the ring using his personal snorkel gear, but was unsuccessful. He then contacted PC Jonathan Kern, the community officer for Beat 8 – Seven Mile Beach South, for his help in identifying someone with a metal detector who may have been able to assist. PC Kern enlisted the help of Mr. Mike Powell, a local metal detectorist, who helped Supt. Graham to conduct further searches. After a number of attempts over the next few days the ring was eventually found. On, Saturday, 30 June, Supt. Graham handed the ring over to the woman and her family just as they were checking out of their hotel to return to the USA.

"It was a real a pleasure to complete such a tangible and positive result for the family who were clearly very upset at the loss of the ring,” said Supt. Graham. “They were totally surprised that we had had gone to such lengths to get the ring back. With the local knowledge of PC Kern and the kind assistance of Mr. Powell and his metal detector, we were able to make a real difference to this family who came to Cayman to have a nice vacation.”

In another incident shortly after 2:15AM on the morning of Monday, 2 July, the 9-1-1 Communications Centre received a call from an elderly woman in the Windsor Park area who reported that she had fallen to the floor inside her apartment, was having difficulty breathing and was unable to get up. The woman was also unable to provide her name or exact physical address.

Based on the description of the circumstances and their knowledge of the area, George Town community police officers were able to determine the location and identity of the woman and respond. The officers were then able to gain access to the apartment and allow emergency personnel to enter and treat the woman.

“I have no doubt that the if the community policing team hadn’t been on duty, the much needed medical assistance would have been delayed considerably,” said Sergeant Roje Williams, who was serving as Shift Commander at the time the incident took place. “That they were able to quickly figure out who the woman was and where she was located, even with such limited information, speaks volumes to the community-based work they have been doing.”