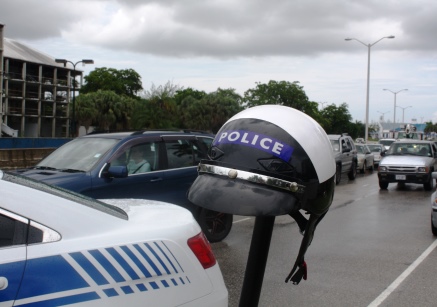 Traffic Enforcement Leads to 11 DUI Arrests and Numerous Tickets, Including 66 for Speeding

Traffic enforcement operations this past week have resulted in a number of tickets issued for various offenses, in addition to several DUI arrests. From Monday, 7 May to Sunday, 13 May, officers have issued 66 speeding tickets, along with 36 tickets for illegal tint and another 36 for use of a mobile phone while operating a vehicle.

Over the same period, officers made 11 arrests for DUI, 8 of which were made over the weekend.

Shortly before 7:00AM on Thursday, 10 May, officers on patrol along Shamrock Road near the Grand Harbour roundabout observed a vehicle travelling east which appeared to have tint darker than the legal limit. The driver was signaled by the officers and pulled over, but drove off again as they approached. The car was intercepted nearby, in the vicinity of Bimini Drive, and the driver spoken to by officers. He was unable to provide a driver’s license, and it was determined that his license was expired. As officers spoke to the driver they noticed the smell of alcohol on his breath, and he was breathalyzed with a reading of 0.199%. The man, age 28 of Bodden Town, was arrested on suspicion of DUI and driving with an expired license, in addition to the tint offense. He was later bailed.

“As we are well into the fifth month of 2018 we hope that it is clear to the public that this is the new normal for traffic enforcement,” said Inspector Ian Yearwood. “We will continue to target and prosecute those who use the roads in an unsafe manner in order to deter others from doing so.”